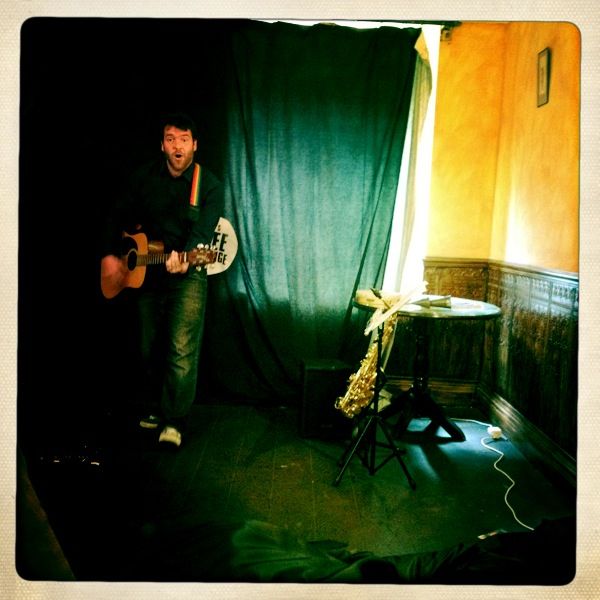 Simon is without doubt one of the most exhaustively creative people I’ve ever known. On any given day he’ll either be writing a novel, a play, poetry, making a short film, learning a new instrument, gigging in an Edinburgh pub. He’s rapped, he’s fire juggled, he’s run a theatre company, he can drink more than anyone else I know and still talk philosophy and nonsense till dawn. Oh and did I say that he was a junior Olympic 10m diver too?

Simon has always reminded me of a mad inventor. When he arrives for a gig with a wheely suitcase full of instruments, props, costumes, files full of lyrics and poems, it’s like stepping into a crazy, chaotic laboratory full of weird and wonderful contraptions, some of which are being held together with the minutest piece of masking tape. When he cranks up the engine on his latest mad invention and the cogs start turning, the whistles start blowing, the pipes begin releasing steam, something of Simon’s haphazard and ramshackle genius comes to life.

He is a great lyricist and performer, with songs inspired by late night conversations with students, “I don’t give a f**k what you did on your gap year”, and by eccentric British missionaries, “Pushing a piano across the Kalahari”. He has about 25 different instruments all fused together with a foot pedal; balkan beats, bossanova, punk, folk. His poetry is inventive, moving and at its best when the man whose life it reflects breathes that life into it. He’s a little bit genre defying. Fusion in its truest sense. Or is it fission?

Simon has more energy than anyone I’ve ever met. If the occasional cog or whistle goes flying off his latest crazy musical invention… well… the Hadron Collider wasn’t without its hiccups, was it? And Simon will just laugh it off and carry on.

He’s warm, funny and charming and a very good person to go for a pint with. His latest show, part of the Free Fringe, is on every day at the Fiddler’s Elbow, Edinburgh until the 16th August at 12.15.

Go see for yourself.