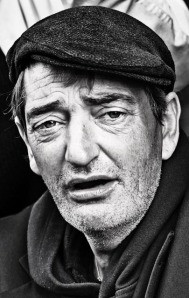 There’s an exhibition of photos by August Sander at the Dean Gallery at the moment. Sander’s once said:

“Nothing is more abhorrent to me than sugary-sweet photography, full of pretense, poses and gimmickry. For this reason, I have allowed myself to tell the truth about our times and people in a sincere manner.”

I totally see where he’s coming from on the ‘sugary-sweet photography’ and given that he said this during the first half of the last century, I can’t imagine what he would think of photography nowadays. But it’s still quite a statement; to declare yourself a truth teller. I’m not sure whether it’s at all achieveable either, unless you were to append the words ‘as I see it’ to the end. Surely, ‘truth’ is just perspective driven by conviction.

What I found interesting about the exhibition though was that there was something very egalitarian about the way a lot of the portraits are posed and presented. With a 21st Century eye, I couldn’t immediately tell the class or profession of a lot of the subjects and relied on the labels ‘Gentleman Farmer’, ‘Philosopher’, ‘Writer’ or my particular favourite ‘The Woman of Progressive Intellect’ (was there only one??) for explanation.

So here’s my 21st Century equivalent. ‘Drunk Man’. I’m open to debate here, and I’m thinking of going along to the Still’s Democratic Camera Club on Thursday which will discuss this very subject, but without the title, could you tell that this picture was taken recently? Even with the title, is this truthful and sincere? I’m saying he was drunk but bottles of White Stripe cider and tenants lager cans aside, I never breathalyzed the guy so can’t say for sure. Even if he was, is it a fair summary to label him such. I wonder if Sander’s ‘The Cretin’ might feel equally short changed.